by The Zero Filters 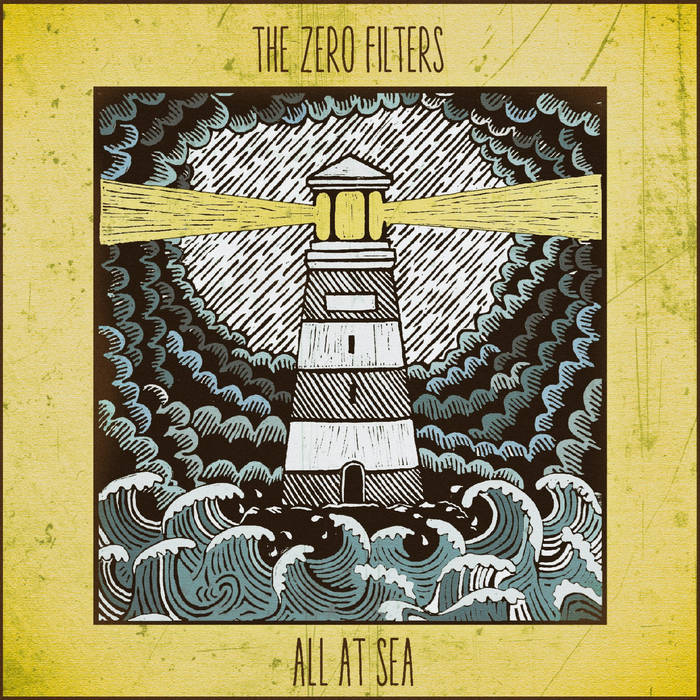 'All At Sea' is the sound of things falling apart, but in the most fun way possible. It's a sailor wrecked at sea, a hiker stranded on a mountain, and a dog floating through space. It's the sound of a man wandering lost through a forest at night, a bird chained to a perch, and a man losing his marbles. It's the sound of the apocalypse, in full colour.

All songs written by The Zero Filters:

Recorded, mixed and mastered by Andrew Goode at Forest Of Sound studio, with drums mixed by Moshe Foster.

Lyrics by Andrew Goode, except tracks 2 & 5 which were written by Andrew Storey, and track 4 which was written by Storey/Goode.

The initial idea for 'Waffleshop Macaw' was conceived and jammed with Dave Lowe, and the bass lines for 'Laika' and 'Burning Hemingway' were originally written by Dave Shaw, who also provided lyrical assistance on 'Burning Hemingway'.

Formed in 2016 by singer songwriters Andrew Goode & Andrew Storey, and later joined by Mark Darvill and Moshe Foster on bass and drums, The Zero Filters play a quirky blend of folk, pop, ska and rock.

Track Name: Bottom Of The Sea
Hoist the anchor, man the rigging
Leave the nine to five behind
We’re heading west with the wind in our sails
We’re going where the sun don’t shine.


Leave your briefcase at the office
Hang your troubles on the door
We’re coming out with a song in our hearts
Pack your bags, leave your baggage on the shore.

Take your fishnets from the closet
Kiss the wife and kids goodbye
We’re setting sail on an ocean of blue
Where we’ll dance under a multi-coloured sky.
Track Name: Down, Down, Down
As you sink beneath the waves
Close your eyes and drift away.
And you’ll sink like as tone.
Say your prayers and let it go.

Hear the calling of the deep.
Time stands still in an endless sleep.
And if Matsu roams these seas,
The queen of heaven might intervene.

The water’s all around, can you hear that sound?
You’re sinking and the ship is going down.
Track Name: The Laughing Baron
Manfred Von Richtofen up in your albatross
Spinning out gossamer dropping like candyfloss
Cackling up in the sky,
All of a sudden my legs turn to butter
I’m seeing in double my mind is a flutter
I’m feeling so high.

Somebody call The Laughing Baron
This is an S.O.S!
I’m flying so high over the Pyrenees
Send me a flying circus and a thousand violins
Play me a song to lift me off my feet.
Track Name: The Bitterest Pill
When I’m feeling lonely, in need of a friend
I can’t deny you will be there ‘til the end
When dark times come calling, and I’m running from the blues
Just give me a sign, and I will come running to you.

When I'm feeling woeful, and all my joy is gone
You help me forget all the things I have done wrong.
When the devil comes a knockin', and demons hold me down
You lift me up and take me to Top-Heavy Town.

You lift me up then you throw me down
You got me running all over town
I don’t know why I keep you around
I chew you up and you spit me out.
You are the bitterest pill.
Track Name: The Ballad Of Witherington Southersby
I’m obsessed and panicky, consumed with tragedy
Can’t seem to get out of bed.
Each day is a struggle to make sense of this muddle
And lose that strange voice in my head.
My neighbours think I’m crazy and I’m drinking myself to death.
Oh, man – all I need is a friend.

Benzodiazepine’s never quite what it seems
It left me soft in the head.
Just staying afloat while I’m living on toast
And now I’m shacked up in my shed.
I know I should be sleeping but I’m just lying here instead.
So I went to see a doctor, and this is what he said:

“Hey son, you’ve missed out on all of the fun.
You’ve painted a landscape of woe, stress and heartache,
And lost touch with everyone.
Life’s just fine, if you’ve got peace of mind,
The future’s uncertain but don’t draw the curtains and take each day at a time."
Track Name: Burning Hemingway
In the shadows of the trees
There's a whisper on the breeze
And its calling me away
Burning Hemingway.

As the night defeats the day
And the words they fade away
It's once more into the fray.
Burning Hemingway…

Blind, weary and alone
all the bridges have been blown
I'm so far away from home
Burning Hemingway.

Running from the fireflies
Waiting for the sunrise

Page 62, page 63, page 64, one page more
Page 67, page 68, page 69, running out of time.....
Track Name: Waffleshop Macaw
In a little town I used to know in the middle of Formosa
There’s a lot of strange things happening, and if you look a little closer
You might find a waffle shop with waffles galore
And a lonely looking bird perched outside the door…

Hello, hello, is it me you’re looking for?
I’m waffle shop macaw (x2)

Now our feathered little friend he was taken from Belize
Where he spent his days flying and roosting in the trees
But now he sits alone and talks to people every day
And if you listen close you can hear him say..

Hello, hello, is it me you’re looking for?
I’m waffle shop macaw (x2)

How does it feel now that you’re all alone?
Locked up in here and so far from home?
How does it feel, now that you’ve nowhere to be
Stuck in a pond when you should be out in the sea?
Have you ever heard a tale quite so dreadful or absurd?
The story of a man who makes a monkey of a bird
So if you see a raptor next time you’re in a zoo
Imagine how you’d feel if the bird was you!

They’re laughing and pointing
I’m chewing on my tethers
They’re staring and poking
I’m pulling out my feathers
Track Name: Laika
Laika, where you been?
Tell us what you've seen.
Up in your tin machine
Are we blue and green?

Laika, what they promise you?
A golden handshake and a bone to chew.
Laika, what you gonna do
As the world slowly falls out of view?

Spinning ‘round, you got me spinning ‘round
I’m moving at the speed of sound
And I’m never, ever coming down.
Russian hound, I’m on a mission from The Motherland.
I’m moving at the seed of sound,
And I’m never coming down.
Track Name: The Kind Eagle
I am the kind eagle, and you are my prey.
I'll tear you to ribbons, in the loveliest way.
My eyes are like diamonds, looking into your soul.
I'll hold you so gently, then devour you whole.
I'll watch you so closely, as I circle above.
I’ll feed on your fear, as I give you my love.
A benevolent tyrant. A tyrannical slave.
I will love you forever, right into the grave.
Cause I am the kind eagle, and this is my song.
I do nothing right, but I'll do you no wrong.

I am the kind Eagle, and you are my mate.
A symbol of freedom. An emblem of hate.
A beautiful birth mark, tattooed on your skin.
A paragon of virtue. An original sin.
My talons are razors, digging into your arm.
As long as you’re with me, you’ll come to no harm.
I’m the lump in your throat. And the swell in your chest.
I’ll be your protector, as I get you undressed.
I am the kind eagle, and these are my claws.
Can you still love me, with all of my flaws?
Track Name: The Beginning Of The End
As we stand on this ledge, and we dangle from the edge.
We can see there is no turning back.
It will all be over soon, as we dance to your tune
And we’re doomed to be dressed in black.

You can run, you can hide, you can lock yourselves inside
But this time, you’re not getting out alive
With the wind rushing round, and the buildings crashing down
It’s the sound of your own demise.

I see death round the bend, this is it my old friend.
This is the beginning of the end.

I see riders on the waves
I see rows of unmarked graves.
And a sign that reads ‘the end is nigh’.
I see poison in the well,
Serpents at the gates of hell,
And it’s clear that we’re all gonna die.

In your head, in your heart is the only place to start
All these walls they won’t help you sleep.
When you lie in your bed with a pistol by your head
We’re all dead and we’re in too deep.

I see death round the bend, this is it my old friend.
This is the beginning of the end.

Bandcamp Daily  your guide to the world of Bandcamp